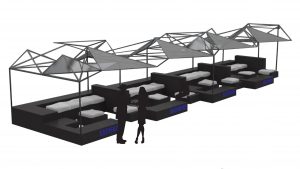 This project proposal set a Real State fair design, created for Easyfairs Company who will create the next Real State fair in Madrid 2017. Our project consist in design a space in which you could appreciate two worlds coexisted together, one over another.

First, you could see the foundations placing in the space below that support and welcome the brand, the real estate company. Also, the heavy consistency and stable material of the foundations represents the past work of the companies settling their brand.

Second, the networking in the space above configure the future connections between professionals and customers in the real state sector that will take place during the fair. Besides, the superior design symbolized the future throughout the light and ethereal structure.

Likewise, we can associate the superior structure with the “software” term because it is the functional part, which you can’t see at first sight but it is responsible of giving shape and meaning to the interactions during the event. And the “hardware” term can be associated with the lower structure, which you can see with a simple sight and is the most rooted part.

At the end, you could perceive how the symbolic concept of each space and his function have transformed the fair environment into this installation. “When you looking up, you won’t find the sky to which we are accustomed, you will discover that another city grows above your head. An alternative reality, the future.”

Finally, even the graphic of the event forms part of this union between the worlds, being a fusion of the shadows thrown from the elements of the stand, showing the constructive representation on the floor plan with very simple and geometric forms. 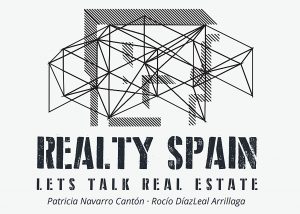